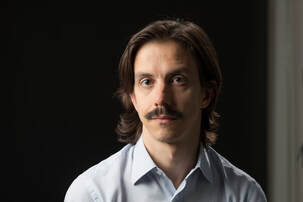 Iñigo Giner Miranda is at home in a number of places -not only geographically speaking, but artistically: classically educated as a composer and pianist, he works regularly as concert designer, composer or performer/musician in concert halls and theatres all across Europe. He has, e.g., worked for directors such as Barbara Frey, Ruedi Häusermann, Matthias Rebstock or Rafael Sánchez at some of Europe’s leading venues, Schauspielhaus Zürich, Teatro Real Madrid, Schauspielhaus Köln or HAU Berlin, among others.

As a composer and concert stager he was selected for the #bebeethoven programme of the Bundeskulturstiftung (Federal Cultural Foundation), where he collaborated for three years with the Zürich Tonhalle orchestra on the development of staged concerts for the orchestra. He began developing different concert formats in 2013 at Podium Esslingen and has since then created and shown staged concerts for orchestras, soloists and ensembles in, i.e., Isarphilarmonie München, Bundeskunsthalle Bonn, Ruhrtriennale, Pierre-Boulez Saal Berlin, Radialsystem V, Gare du Nord Basel, L’auditori Barcelona or Münchener Biennale. He is a founding member of the Berlin Ensemble DieOrdnungDerDinge, also devoted to the creation of hybrid formats between theatre and music.

He has given talks and courses on the subject matter of new concert formats and stage work for musicians, most regularly at the UdK Berlin but also in other spaces such as Budapest Music Center, Musikene -Music College of the Basque Country -, Oblivia Symposium Helsinki, Humboldt University Berlin, EVA Conference London (Electronic and the visual arts).
​