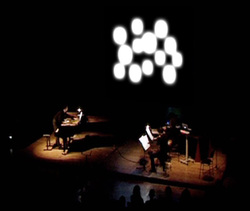 “Tratado de imágenes” (“Image treaty”) is a piece for live trio -violin, clarinet, piano- and video track.
I used this piece as a personal laboratory (hence the “treaty” in the title) to research on the relationship between image and music -sound-, departing always from a joint approach: to me, it wasn't a question of visualizing the music or “sonifying” the images, but rather of building a context where both disciplines would work together towards the creation of a musical piece. The image here does not add a layer onto the music, the image is the music as much as the sound is.

I decided, accordingly, to edit the whole video track myself, as it was the only way I could keep a compositional eye over the whole process. The video uses images that either are or verge on the abstract, and thus favour a relationship to the music built on equal terms, including fragments of early XX century videos by Man Ray, Ferdinand Leger and Joris Ivens, as well as original images. The piece explores the different functions these elements (images and sound) can fulfil in the different contexts proposed, while reflecting on the workings of our perceptive mechanisms. 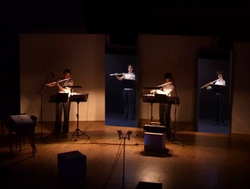 Ceci n’est pas de deux  is a piece for two flutes, video and cassette recorder, dedicated to the flutists Jana Machalett and Marieke Franssen. The idea of the piece, as can be gathered from the title, circles around the question of representation and reality, as presented in Magritte’s famous painting Ceci n’est pas un pipe. The video images in the piece are the images of both players, pre-recorded along with the sound. The initial flute solo slowly multiplies in different directions, by means of the cassette recording and the video images, transforming the whole into a kind of virtual quartett, in which recorded and real images acquire almost the same status, confusing our perception at times and thus playing with the boundary between reality and virtuality.

El orden de las cosas (17‘) was written in 2011 and dedicated to the actors/musicians Vera Kardos, Daniele Pintaudi and Cathrin Romeis, who premiered the work on April 2011. The piece also gives the interdisciplinary group "Die Ordnung der Dinge" -O.D.D.- its name, and it explores the intersection of theatre, music and performance.

The piece is comprised of four sections, that gradually turn a theatrical departure point into a musical situation, using the actions and objects on stage as musical material. During this process, there grows a tension between the scenic-realistic approach, in which all actions from the actors function as a result of an inner motivation, and an artificial, musical approach, in which the relations between those actions and figures themselves are the centre of the piece (for instance, when certain actions are performed in rhythmical unison or rhythmically complementing each other). This sort of estranged, mechanical approach, combined with the apparenty "natural" fashion in which the movements are performed confuses our hearing and seeing habits and produces a fascination, not only in itself, but also because it serves as a means of reflecting on certain human features such as freedom, and social behavioural patterns. The synchronization of the sounds from the tape with the actors' actions towards the end bring, albeit with a touch of humour, our perception mechanisms into question.

Cuaderno de notas is a piece about two pieces. The whole first part is comprised of five different chapters, all of them presenting a different musical context that orders the musical elements in different ways (emphasis is made on timbre in the first section, whereas the second presents an almost entirely repetitive structure and a contemplative discourse, the third deals with masking effect by means of dynamics and splits the ensemble in two groups...). These 'scenes', as I like to think about them, are intentionally unrelated although they succeed each other without uninterruptedly, and so the piece seems to jump from one place to another. The different sections are increasingly different until the first part of the piece closes with an almost meta-section, in which a bar that had appeared briefly as an interruption is repeated several times, and the elements within it shuffled, so that they build different gestaltic entities; the theme of context, repetition and form-building is thus brought to the fore of the music. That marks the end of the first section.

The second part starts exactly the way the first one did, that is, the piece begins again: after a verbatim repetition of the introduction by the violin and cello, the first section is “repeated”, but fundamentally changed. The musical gestures yield no audible result (this is achieved by means of techniques that are capable of producing sound or not while appearing identical to the eye, such as fingering really high pitches, close to the bow, or bowing on one's finger, which yields no sound whatsoever) and so the piece turns into a piece about the visual world of the ensemble. Within this new context, different materials and textures from the first section come back, this time in a much more lineal fashion, transforming and blending into one another. As the piece advances, the visual aspect gains more ground, until the sound completely vanishes and only the gestural element of the music remains. This end is followed by a coda which presents its negative, that is, all the musicians remaining in a 'freeze' position for the last minute and a half (the 'freeze' action itself having played a very important role in the first section), but the music sounding on. The sounds come from the piano (played with an e-bow) and from the musicians, that create a subtle texture by singing with almost fully closed mouths.